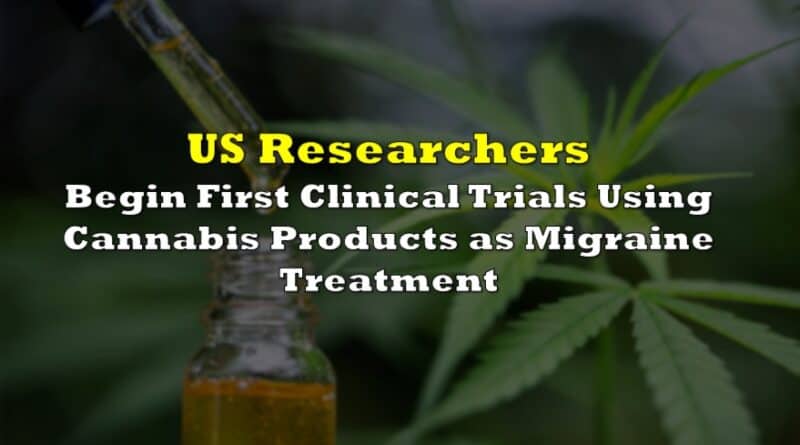 Researchers in the US have started what is the country’s first double-blind, randomized, placebo-controlled study examining the effect of cannabis products on severe migraine symptoms.

Recreational cannabis use is currently legal in 16 states including Washington DC, while another 37 states have legalized the drug for medical use. Both Virginia and New Mexico are expected to follow suit, but the changes to their legislation will not be in effect until this summer. Although numerous states across the US have taken a dovish stance on marijuana use as of recent, research into the effects of cannabis-derived THC and CBD have yet to gain any meaningful traction.

However, it appears that researchers at the University of California San Diego (UCSD) School of Medicine have initiated the first step, and recently started the first clinical trials testing the efficacy of cannabis products on individuals suffering from acute migraines. As of current, the researchers are running the trial with 20 participants who suffer from frequent migraines, though they anticipate to increase the sample size by an additional 70 volunteers in the foreseeable future.

For those that suffer from acute migraines, the symptoms can be extenuating, with pain lasting for hours and sometimes even days. Meanwhile, other suffers must deal with a plethora of additional negative symptoms, including nausea, vomiting, and even extreme sensitivity to light or sound. Although numerous treatment options are available, those suffering from reoccurring migraines are still having difficulty finding effective relief using traditional medical or pharmaceutical interventions.

On top of that, some patients do not respond the same to the current widely available treatments, and even those that do might see the positive effects fade over time or completely cease working altogether. In the meantime, however, some individuals have occasionally reported that their symptoms diminished after using cannabis products as an alternative treatment.

“Many patients who suffer from migraines have experienced them for many years, but have never discussed them with their physicians. They are, rather, self-treating with various treatments, such as cannabis,” explained UCSD neurologist and headache specialist Nathaniel Schuster.

Given that there is currently a lack of relevant research analyzing the effectiveness of cannabis products and their derivatives as a treatment for chronic ailments such as migraines, UCSD researchers decided to initiate the first study of its kind. The medical researchers grouped the participants into four random categories: the first group received placebo vape pens, the second group was administered four puffs of cannabis flower with the psychoactive ingredient THC; another group received cannabis with CBD; and the last group was given a cannabis vape pen with both THC and CBD.

The research team will test the effect of each group’s treatment against frequent migraine symptoms including nausea, vomiting, sensitivity to light and sound, and headache pain over the short and long term. Previous preclinical trials have deemed promising results, with more follow-up studies likely to ensue, eventually providing migraine-sufferers with effective alternative treatments.